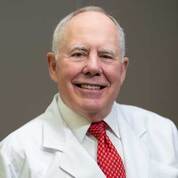 Dr. Rhea’s activities outside of dentistry include having served on the Board and as President of Big Brothers and Big Sisters of Houston, having earned a 7th Degree Black Belt from the United States Judo Association, having completed three marathons and summiting Mount Rainier in Washington. His hobbies include woodworking, cooking and backpacking.

Dr. Rhea is most proud of his family. His wife since dental school, Kay, is a Crystal Apple Award winning sixth grade science teacher. Son Sean is a PhD computer scientists with Meraki Corp. in San Francisco and Sean’s wife Lucy Almers, MPH is a consulting data analyst with Kaiser Permanete studying gastrointestinal cancers. Youngest son, Darren has a MS in mathematics and studied for his PhD in mathematics at UC Berkeley. Darren works for Civitas Learning as a data analyst for online educational systems. Darren’s wife Anna Ayzenshtat has her MS in mathematics and works for GM corp. Darren and Anna live in Austin, Texas. Lastly, two blond lab perpetual puppies, Missy and Max, keep the house in a turmoil.

Meet Our Other Doctors

At The Dentists at Town & Country Village, we work as a team to provide the best possible experience in dental healthcare.