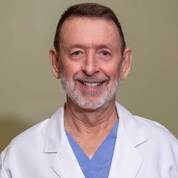 Dr. Tom Ewing began his private practice in Houston in the spring of 1977 after having been stationed in Houston by the United States Public Health Service while serving as a Lieutenant Commander dental officer. After his graduation from the College of Dentistry at Ohio State University in 1974, he completed a 15 month residency in hospital dentistry with the USPHS at the Baltimore, Maryland Marine Hospital.

During this time Dr. Ewing also became the father of two sons; Justin and James are now grown and married and have each become the father of a daughter and son of their own. Robyn, Tommy, Cambridge and Mitch are Dr. Ewing’s four grandchildren, two in Dallas where their dad is a test engineer for Texas Instruments, and the other two at Fort Gordon in Georgia where their dad is also a dentist, and serves in the United States Army. Dr. Ewing’s wife Stacey is, among other things, a professional photographer, and some of her pieces can be seen displayed on the walls of our office, and on cards which can be seen in our reception area.

Around the home in west Houston where he has lived for 35 years, Dr. Ewing does a little flower and vegetable gardening, and enjoys other outdoor pursuits such as camping, fishing, boating, and back packing. Away from the house he was a scoutmaster for ten years, involved in Cub and Boy Scouting with his sons at Bear Creek Methodist Church.

Dr. Ewing has been involved in organized dentistry much of his career- from the time he was a delegate to the Student American Dental Association in the 70’s, and most recently when he served as a member of the board of directors of the Greater Houston Dental Society for five years and three years as the editor of the monthly Journal published by the Society. He is most proud of the years he spent serving on the Peer Review Committee which evaluates the facts of cases, and arbitrates disagreements between patients and their dental practitioners when they arise.

As a student, Dr. Ewing was an early member of the Prevention Study Club founded by several classmates to delve into aspects of preventing dental disease not yet being included in our education, and as a life long student, he follows the newest information and trends in dentistry at numerous continuing education courses throughout the year and as a member of the Southwest Implant Study Club at its inception in 1992.

Dr. Ewing believes in the value of modern dentistry in the overall health of the people and families he serves. He strives to deliver, in his soothing manner, excellence in care, tailored to the individual needs and wants of his patients, the quality preventive, restorative, and cosmetic care it takes to put a healthy smile on your face for a lifetime.

Meet Our Other Doctors

At The Dentists at Town & Country Village, we work as a team to provide the best possible experience in dental healthcare.